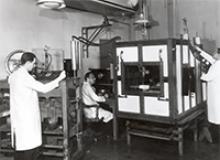 The calorimeter, used in metabolism research conducted by the Russell Sage Institute of Pathology and Cornell University Medical College, is moved to New York Hospital from Bellevue Hospital. Connected to the research is a small six-bed ward, which would later become the oldest ward dedicated to metabolism research in the country. Dr. Eugene DuBois leads the research, which began in 1913 under the leadership of Dr. Graham Lusk, chairman of the Department of Physiology. 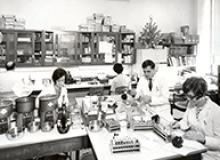 A blood bank is established for blood transfusions in the Department of Obstetrics & Gynecology in 1938. In 1939, the Blood Bank is more formally organized under the Central Laboratories. The first blood bank was founded at the Cook County Hospital in Chicago in 1936. In New York, Mt. Sinai opened a blood bank in May 1938.  (Photo taken in 1968 by Camera Associates.) 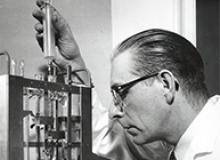 The Departments of Medicine and Psychiatry establish the Internal Medical Laboratory Division, led by Dr. Ade Milhorat, for general medical, biochemical, and pharmacological research. Dr. Milhorat is well regarded for his muscular dystrophy research. (Photo taken in 1952 by the New York Times.) 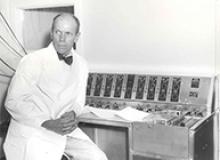 The Departments of Medicine and Psychiatry establish the Neurological Laboratory Division, led by Dr. Harold Wolff, to conduct neurological and psychobiological research. Dr. Wolff is well regarded for his research in the fields of psychosomatic illness and headaches. 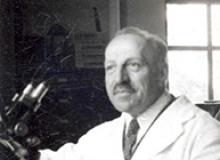 The pap smear test for cervical cancer, developed by Dr. George Papanicolaou from the Department of Anatomy, is first used. Dr. Papanicolaou works with Dr. Harold Traut from the Department of Obstetrics & Gynecology to develop the test. Their book, “Diagnosis of Uterine Cancer by the Vaginal Smear”, is published by the Commonwealth Fund. Research on the pap smear began in the 1920s. 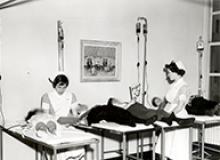 The Transfusion Clinic, the first of its kind in the country, is established for children with Cooley’s Anemia (Thalassemia) and other blood diseases. Dr. Carl Smith, who is considered the father of pediatric hematology, conducts pioneer research on blood diseases. (Photo by Paul Parker.) 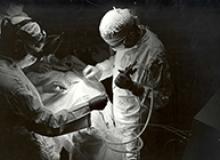 The first eye bank in United States to store human corneas for transplant operations opens at New York Hospital in 1944. 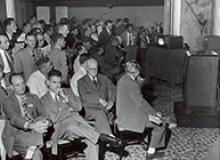 In September, RCA broadcasts the first televised operations performed at New York Hospital to the American College of Surgeons’ conference at the Waldorf Astoria Hotel in New York. 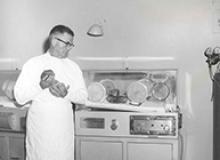 Dr. Samuel Levine conducts pioneer research in the 1930s and '40s on infants’ formulas and respiratory metabolism of premature infants. In 1948, the Premature Unit, one of the first in the nation, is established as a regional center for New York County.

Later in 1975, the Perinatology Center, led by Dr. Peter Auld, continues the tradition of providing advanced, state of the art care for premature infants.

Medical Education Highlight: Institute for Physicians and Nurses in the Care of Premature Infants 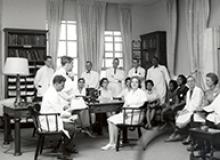 In October, New York Hospital and the New York State Department of Health establish the Institute for Physicians and Nurses in the Care of Premature Infants, one of the first postgraduate programs with focus on premature infants. The course becomes an annual event at the medical center for several years. (Photo taken in 1962 by Esther Bubley.) 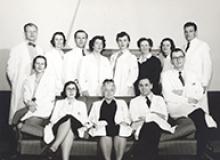 The Medical Comprehensive Care and Teaching Program is established. It remains part of Cornell University Medical College curriculum until 1967. (Photo taken in 1952 by Murray Tarr Inc.) 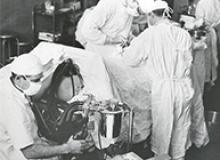 Drs. Frank Glenn and Joseph Artusio develop ether analgesia, which allows a patient to be conscious without feeling any pain or memory of the surgery. 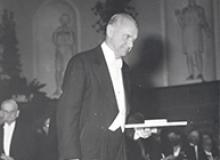 Dr. Vincent du Vigneaud, Chairman of the Department of Biochemistry, receives the Nobel Prize in Chemistry for his research on the pituitary gland hormone oxytocin, which is crucial for childbirth and producing milk.

Dr. Vigneaud is also known for accomplishing the first synthesization of penicillin in 1946. (Photo by Text & Bilder.) 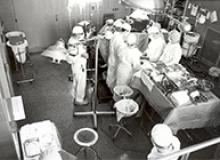 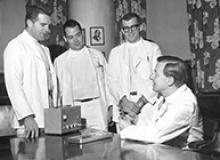 Dr. Fritz Fuchs, Obstetrician and Gynecologist-in-Chief at New York Hospital, is credited with introducing the laparoscope into the U.S. gynecological practice.

Two years later, in 1967, Dr. Fuchs develops the use of alcohol as an intravenous agent for preventing premature labor. 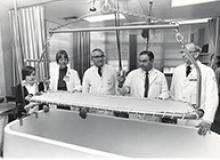 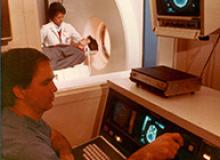 New York Hospital is the first in the New York metropolitan area to install an MRI machine. 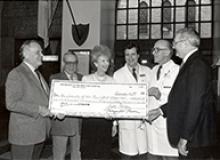 AIDS biomedical research begins in 1983. The Center for Special Studies and AIDS Clinical Trials, directed by Dr. Jonathan Jacobs, is established in 1986. In 1991, a new facility on the 24th Floor of the Baker Tower is opened.

In addition, Dr. Alton Meister, Chairman of the Department of Biochemistry, conducts pioneer research during this time. 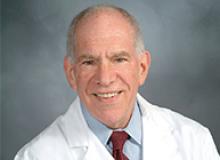 In April, Dr. Ronald Crystal, Chief of the Pulmonary and Critical Care Medicine Division, is the first to use a genetically altered cold virus to treat cystic fibrosis, at his research laboratory at the National Heart, Lung, and Blood Institute. He continues his pioneer research at this medical center.

Two years later, in 1995, Dr. Crystal performs a similar gene therapy to treat colorectal cancer that has metastasized the liver. (Photo by Medical Art and Photography.)