In 2016, these companies also spent close to $500 million dollars on awareness campaigns (Schwartz, 2019). Awareness campaigns, also referred to as “help-seeking advertisements” by the FDA, do not mention a particular drug by name, but rather discuss specific health conditions such as smoking cessation, insomnia, migraine, depression, etc. They may also work to raise awareness of conditions that are not typically considered pressing medical problems such as dry eye, or low testosterone. The goal of these advertisements is to educate the public on various health concerns, but of course they also incentivize viewers to research medications that can treat these conditions.

Whether or not an advertisement specifically mentions a drug name, it is clear by the enormous sums of money spent by pharmaceutical companies that they find connecting with the public through advertisements to be a financially sound investment. In this section, we will now look more closely at modern print, television, and online advertising and what current research in each of these areas has uncovered. 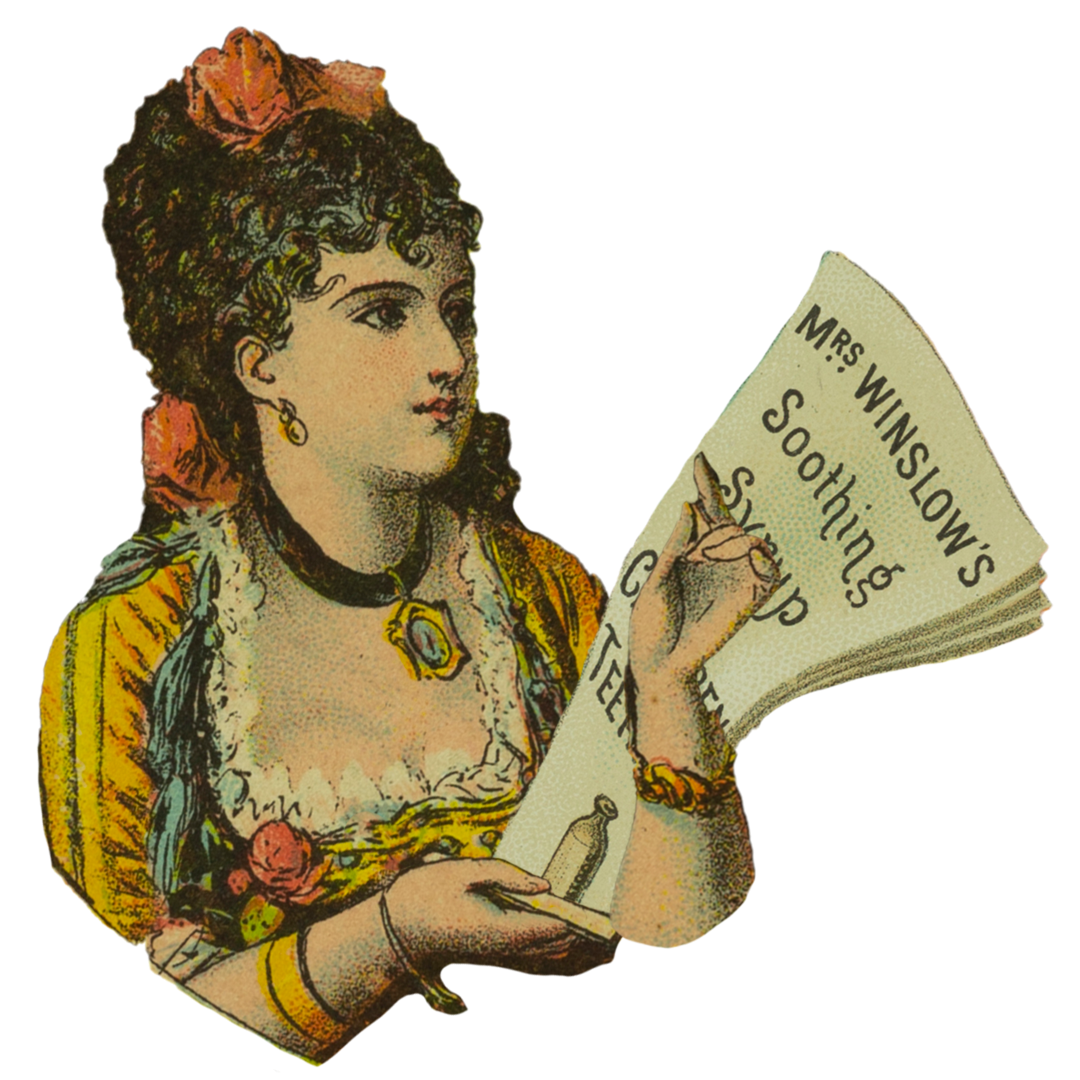 A wide variety of popular print magazines such as Sports Illustrated and Good Houskeeping were examined by researchers interested urological drug advertisements (Folsom, 2010).  The majority of these drug advertisements were for the treatment of common urological conditions such as erectile dysfunction or bladder incontinence. The ads discovered were filled with images meant to capture the reader’s eye and often appeared to have been created to specifically appeal to either male or female readers. When looking at their messages, these ads often discussed symptom control and effectiveness of the medication. These advertisements also mentioned how the medication could increase reader’s satisfaction and enjoyment of life. However, the research team noted that no evidence to support these claims such as charts and/or graphs, or citations of peer-reviewed journal articles, was presented to help the reader further evaluate the medication of interest. Interestingly, none of the advertisements highlighted the safety of the advertised medications.

In a different study, a research team found that readers who encounter drug ads in their magazines tended to fall into one of four categories: “lay physician”, “informed shopper”, “voyeur”, or “evader” (Arney, 2013). These categories were developed by the research team to describe the four unique ways readers interacted with the pharmaceutical ads printed in magazines. For instance, the “lay physician”, “informed shopper”, and “voyeur” will each read drug ads while the “evader” will not. Those in the “lay physician” group looked at drug advertisements to learn more about medical diagnoses and how the drug of interest treated these health issues. They would also recommend potentially helpful medications to family and friends. The “informed shopper” looked at advertisements for their own personal use. If a medication could be helpful to them, this group paid special attention to listed benefits AND side effects, to see if it might be better than what they were currently taking. The “voyeur” looked at advertisements to learn more about diseases, but not necessarily to use or recommend the medications advertised. And finally, readers that flipped right past drug ads were termed “evaders”, as they had no interest in these types of advertisements.

See the table below for more details on each of these groups. Which category do you fall into when reading drug advertisements? 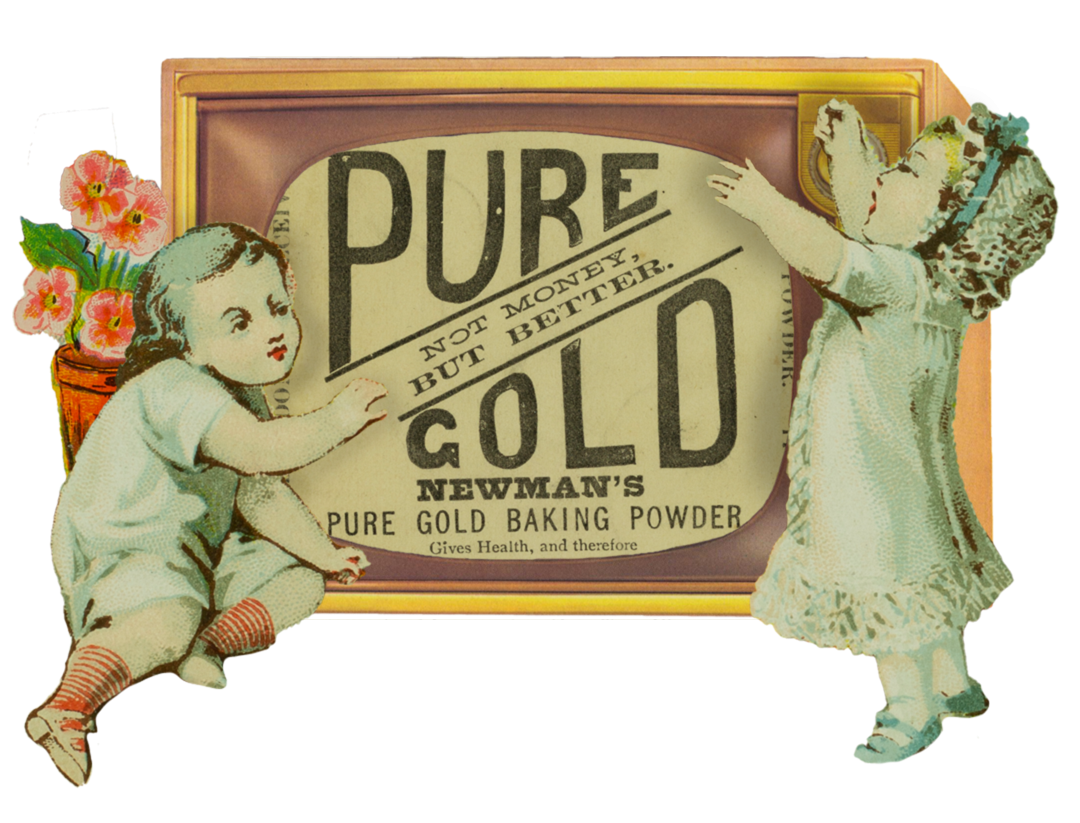 On television, today’s drug advertisments often link the use of their medication with increased physical activity, showing people riding bikes, walking with partners, and playing sports (Applequist, 2018). These ads often depict medications as able to increase social interaction, friendships, and enhance overall satisfaction. To further convince viewers, these ads often use language that stress the novelty and importance of these medications. The medication advertised is often described as “revolutionary”, or “the first time...” some important health benefit can be provided to patients.

While the length of television  drug advertisments has increased by 30% over the past decade, the educational content included in these segments has declined (Applequist, 2018). For example, the importance of lifestyle changes (dietary adjustments, increased exercise) was discussed much less often in newer advertisements which could leave viewers with the impression that these non-drug options were less effective. 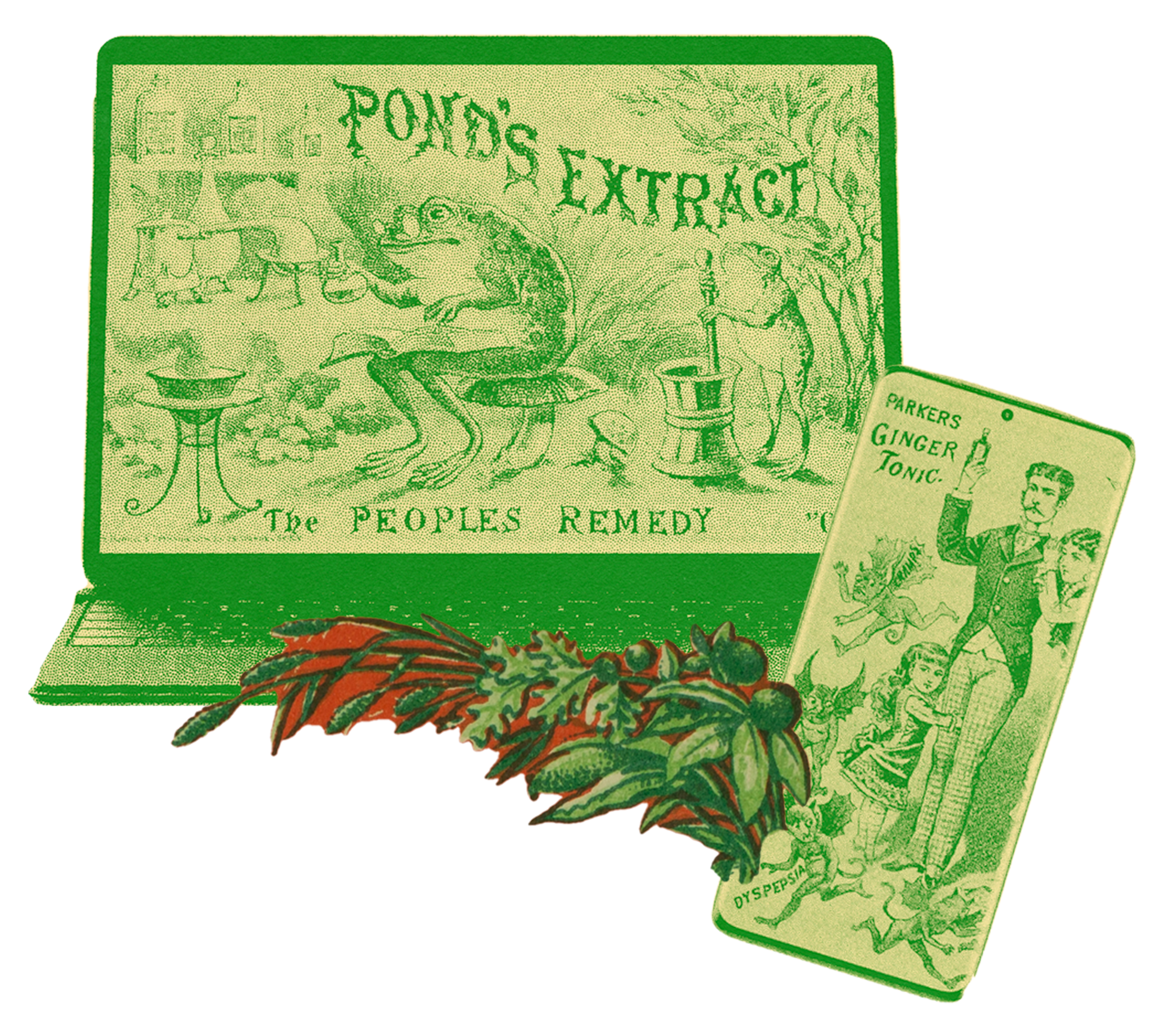 Online advertising is a rapidly growing segment of the pharmaceutical advertising industry.  During 2016, $500 million was spent on internet and mobile advertisements alone (Schwartz, 2019). When searching for health information, internet users often first turn to general internet search engines such as Google, rather than navigating to specific health information websites, such as MedlinePlus. Reliance on the results from a general internet search is problematic when searching for health information as advertisers can use search engine optimization techniques to ensure their products are some of the first among returned results (De Freitas, 2014). Drug company websites for medications may also be problematic as they can be created to draw the eye towards positive images and statements, and away from side-effects, or effective alternative treatments. Likewise, pharmaceutical companies have been criticized for contributing funding to health information websites such as WebMD (De Freitas, 2014). This is concerning as patients may assume these types of websites are neutral sources of health information, but instead they may contain biased drug-company sponsored information.

When searching for online health information, health experts warn that internet users are vulnerable to being influenced by misinformation from pharmaceutical companies (De Freitas, 2013). This vulnerability is due to several reasons:

The Past and the Present of Medication Advertising: Bringing it All Together

Through print, television, and internet advertisements, pharmaceutical companies work to convince us to explore their products. While the method of delivering these ads has certainly evolved from the turn-of-the-20th century and pharmaceutical trade cards, a close examination reveals strikingly similar methods of connecting with a viewer. 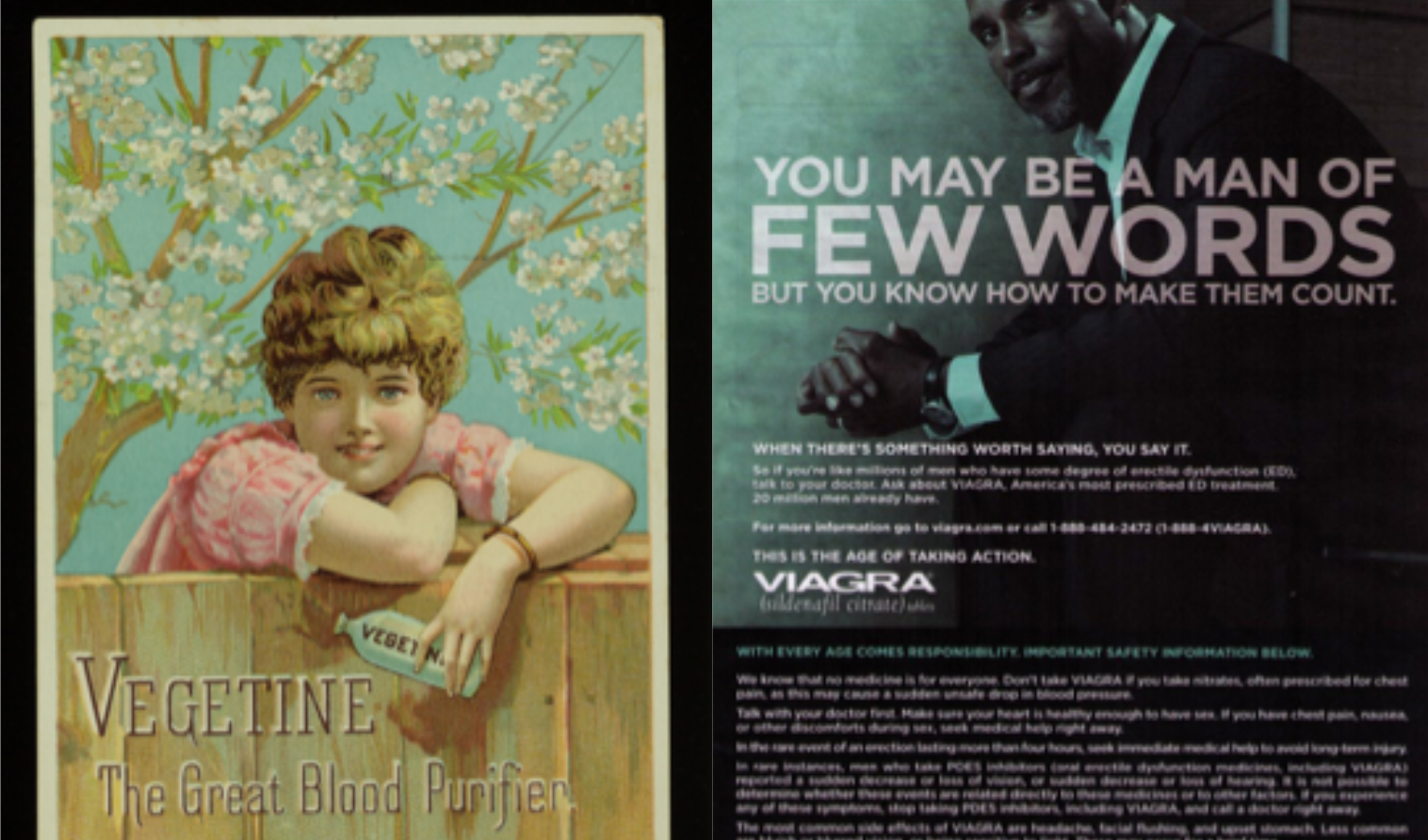 Although these advertisements were created a century apart from one another, they have many similarities. Both feature a person looking directly at the viewer. On the left, the women in the Vegetine ad smiles and relaxes against a fence, holding an empty bottle of the medication. Underneath a flowering tree, she appears youthful and healthy. We are left with the impression that Vegitine will help us regain (or maintain) our youth.  On the right, the man folds his hands in a strong yet controlled manner, thoughtfully looking at the viewer in a well-fitting suit. The blue of his shirt and the background is a subtle visual reminder that this medication is often known as the “blue pill”. Viewers are left with the feeling that Viagra will help one regain (or maintain) authority and success.

While the older advertisement depicts a young Caucasian woman, and the newer one depicts a middle-aged African-American man, both hint that their medications can restore what has been lost and promote satisfaction. One does this through youthful smiles and flowers, while the other does this through specific colors and composed strength. While the modern Viagra advertisement has more text visible, pharmaceutical trade cards also contained quite a bit of text, however these were typically featured upon the card’s backside (which is not included in the above image).

These examples illustrate several of the commonalities seen when looking broadly at both modern and historical pharmaceutical advertisements. Regardless of when they were created, these advertisements tend to focus on reclaiming what was lost. That might be health, beauty, control, or certain daily activities. Whatever it is, advertisers look to convince viewers that a particular medication can help restore and rejuvenate. Closely aligned with this are messages of hope. Many advertisements of both the past and the present worked to instill hope in their viewers. This hope however is usually linked to the medication being advertised. One other overarching theme must also be mentioned, that is a general lack of scientific data to support the claims made by these advertisements. While the medications advertised may indeed be effective and safe (particularly true with modern pharmaceuticals), the data to back up these claims is often excluded from advertisements as chubby babies, cute animals, and smiling people tend to sell more products!

The Food and Drug Administration and Oversite of Modern Pharmaceutical Advertising

Product Claim Advertisements are the most typical drug ad. These are the only advertisements that can refer to a medication by name. These ads include discussions of benefits and risks. This information must not be false or misleading and must specifically mention both the brand and generic name of the medication, at least one FDA-approved use for the drug, and the most significant risks of the drug.

If printed, a “brief summary” detailing who should take the drug, when not to take the drug, as well as rare but serious and common but less serious side effects must be provided. When broadcasted on television or the radio, the drug’s most important risks and either ALL of the risks listed in the medication’s prescribing information, or sources where viewers/listeners can go to learn more about the prescribing information (health care provider, toll-free number, website address, etc) must be provided.

Reminder Advertisements provide the name of a drug, but do not discuss the drug's approved uses. These ads assume the viewer already knows the use of a particular drug. These ads do not have to discuss medication risks, but they also can’t say anything about how a drug works. Reminder advertisements cannot be used for drugs with potentially serious risks, such as those with “black-box” warnings.

Help-Seeking Advertisements describe a health condition or disease but cannot recommend a specific medication or treatment. As we have seen earlier in this section, conditions discussed might include incontinence and erectile dysfunction, or the dangers of high cholesterol, osteoporosis, etc. These advertisements often direct the viewer to talk with their health care provider, but can also include a drug company’s name and number for patients to refer to should they be interested in learning more information.

Look closely to figure out which are the correct and which are the incorrect examples! After investigating each, click on the ANSWERS link below to download the answer sheet!

Remember - A product claim ad names a drug, the condition it treats, and talks about both its benefits and risks. 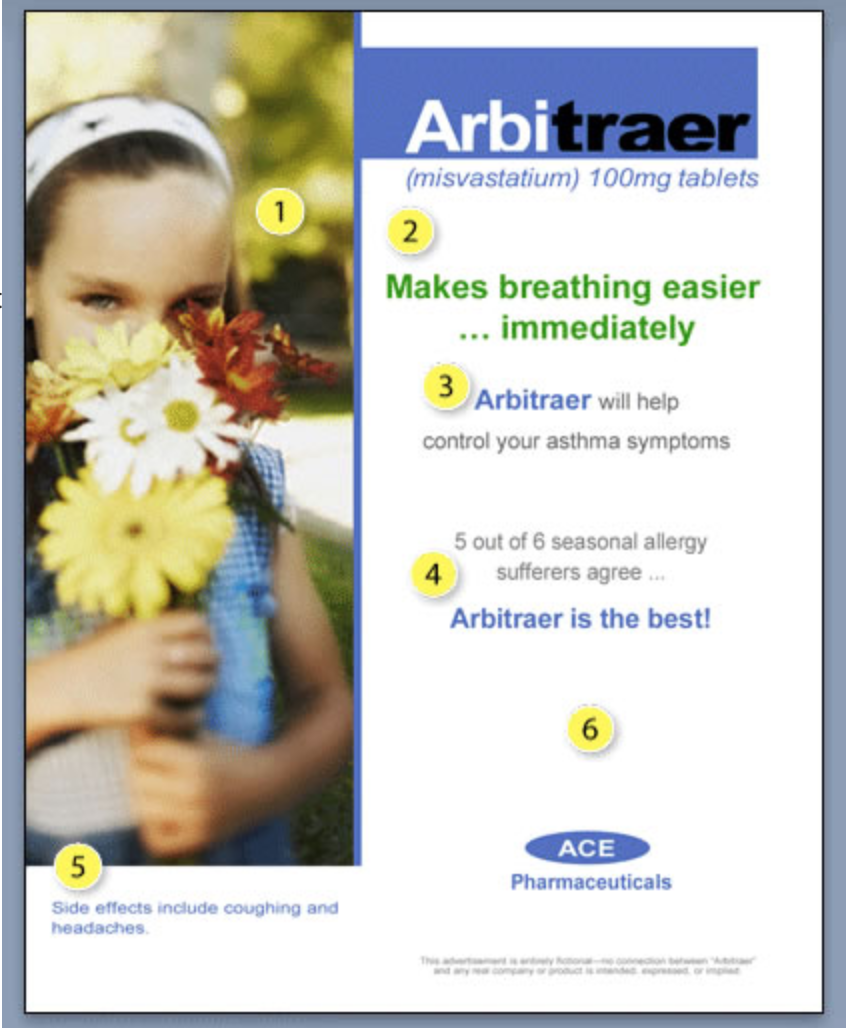 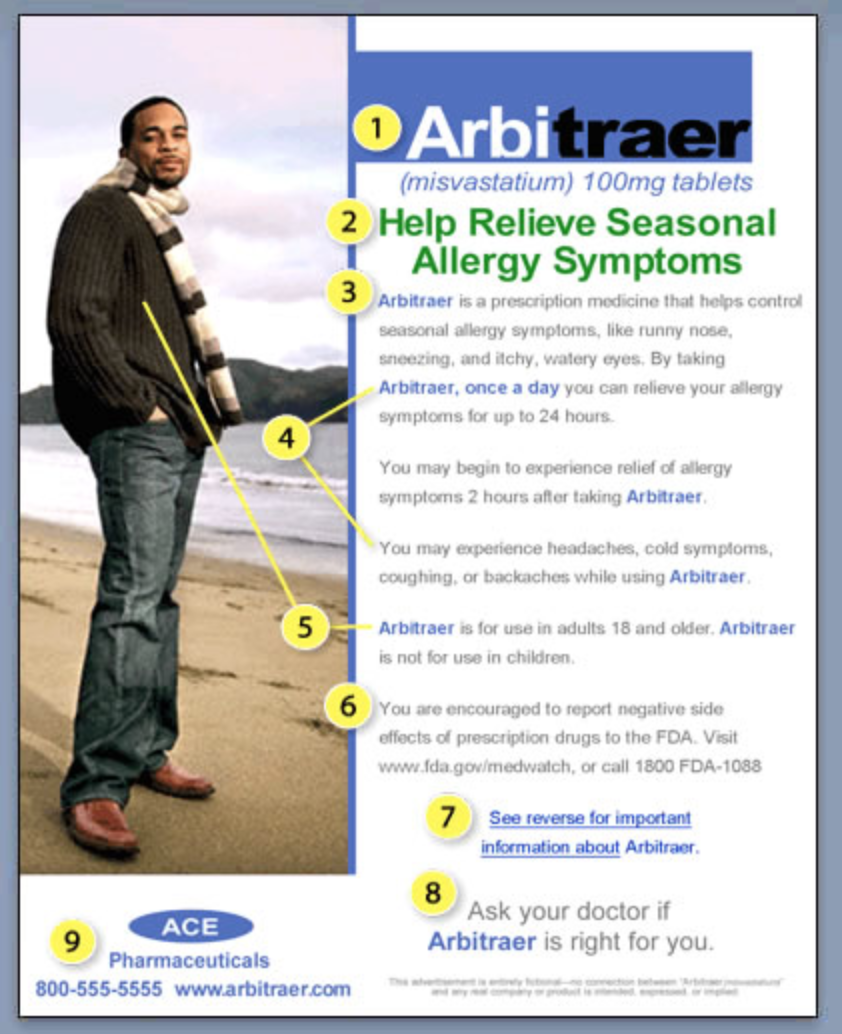 Remember - A reminder ad gives the drug's name but not the drug's use. 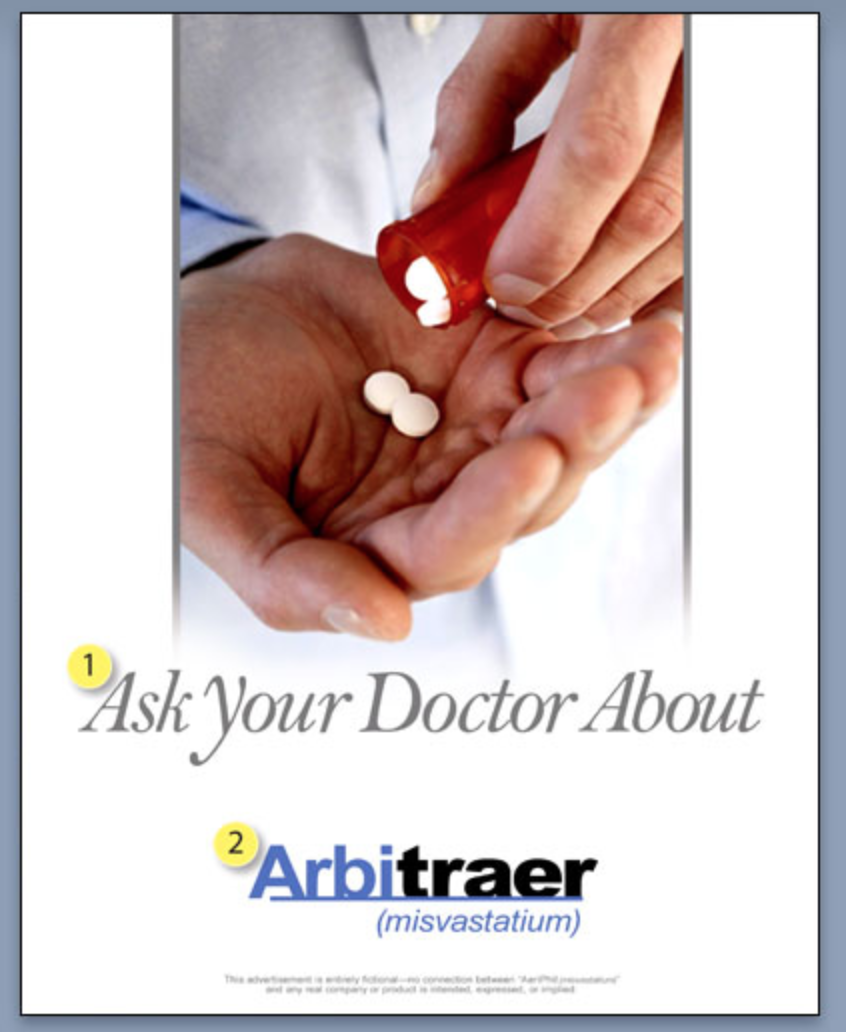 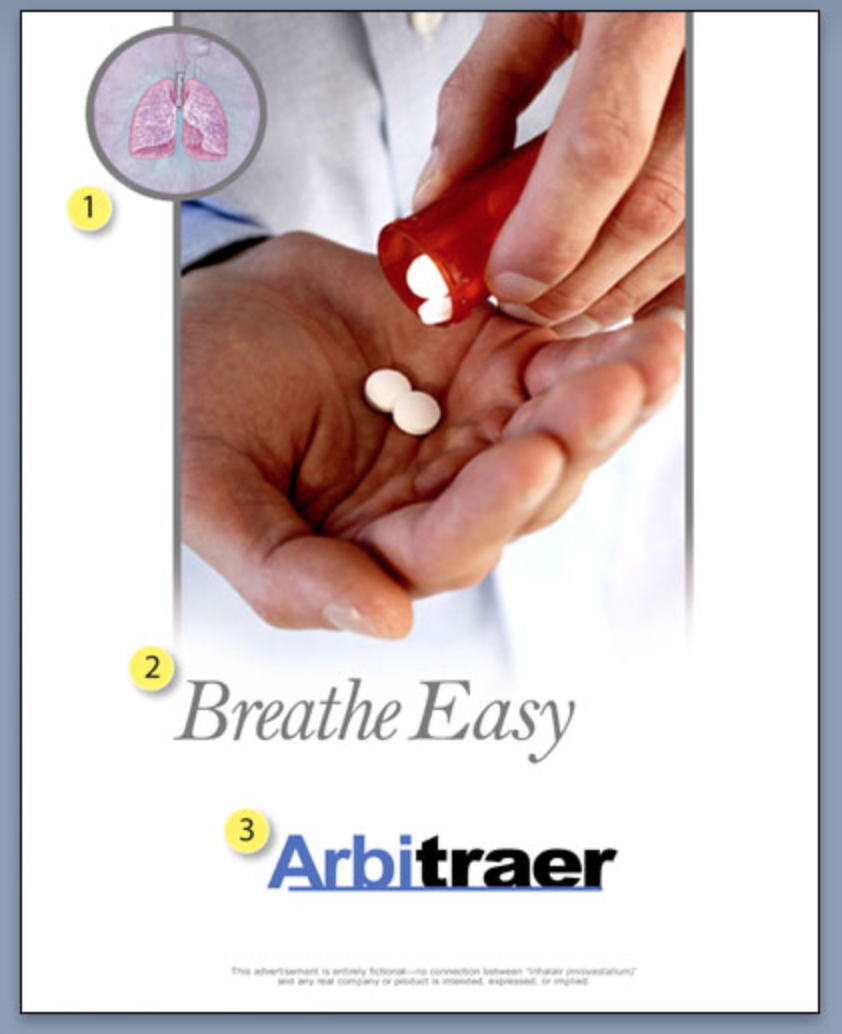 Remember - Help-seeking ads describe a disease or condition but do not recommend or suggest specific drugs. 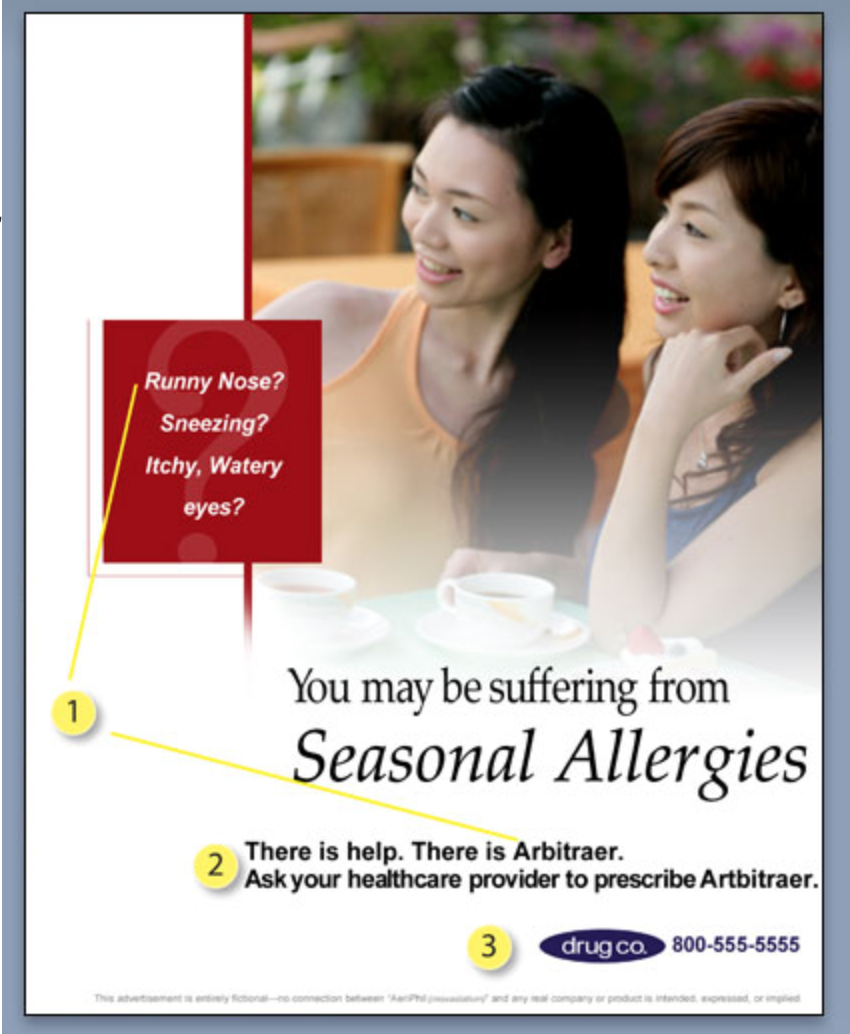 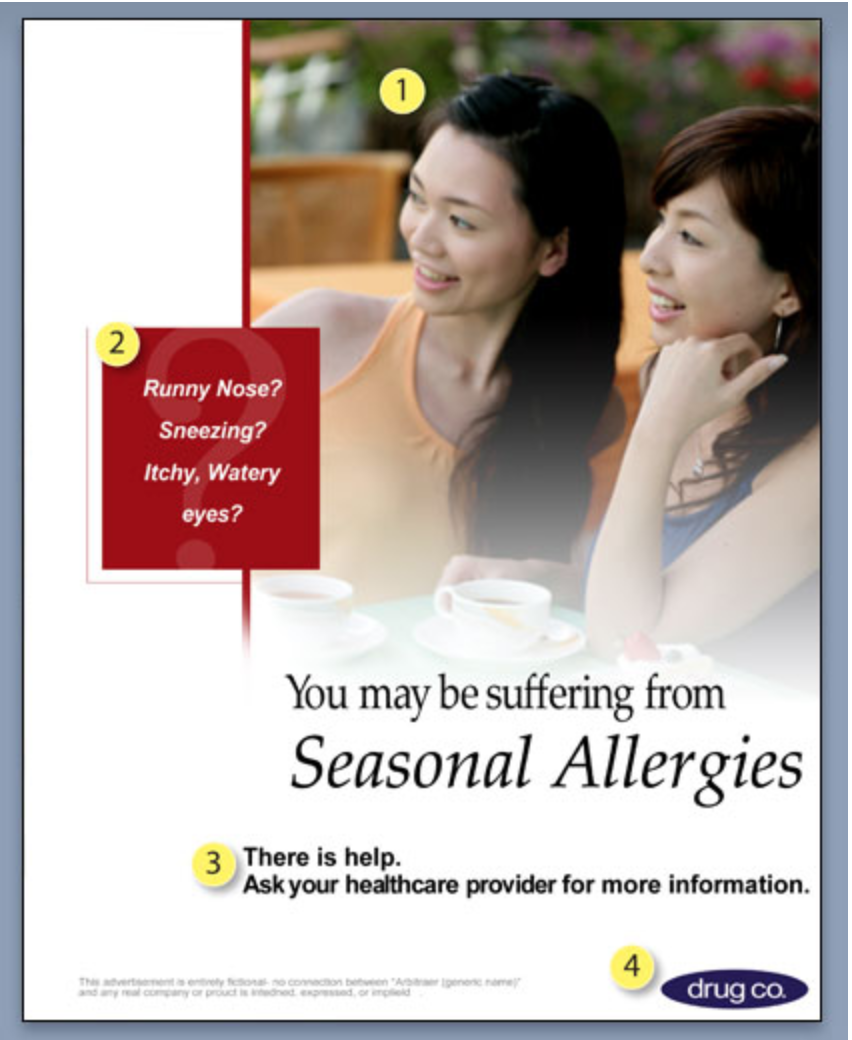 The FDA actively monitors television commercials, printed advertisements, and online media to ensure pharmaceutical companies follow their guidelines when advertising. If found to be in violation of these regulations, the FDA issues warning letters to the companies at fault. These letters describe in detail the type of violation/s, provide specific examples of these violations, and address how the company can comply with the FDA’s regulations as they move forward. 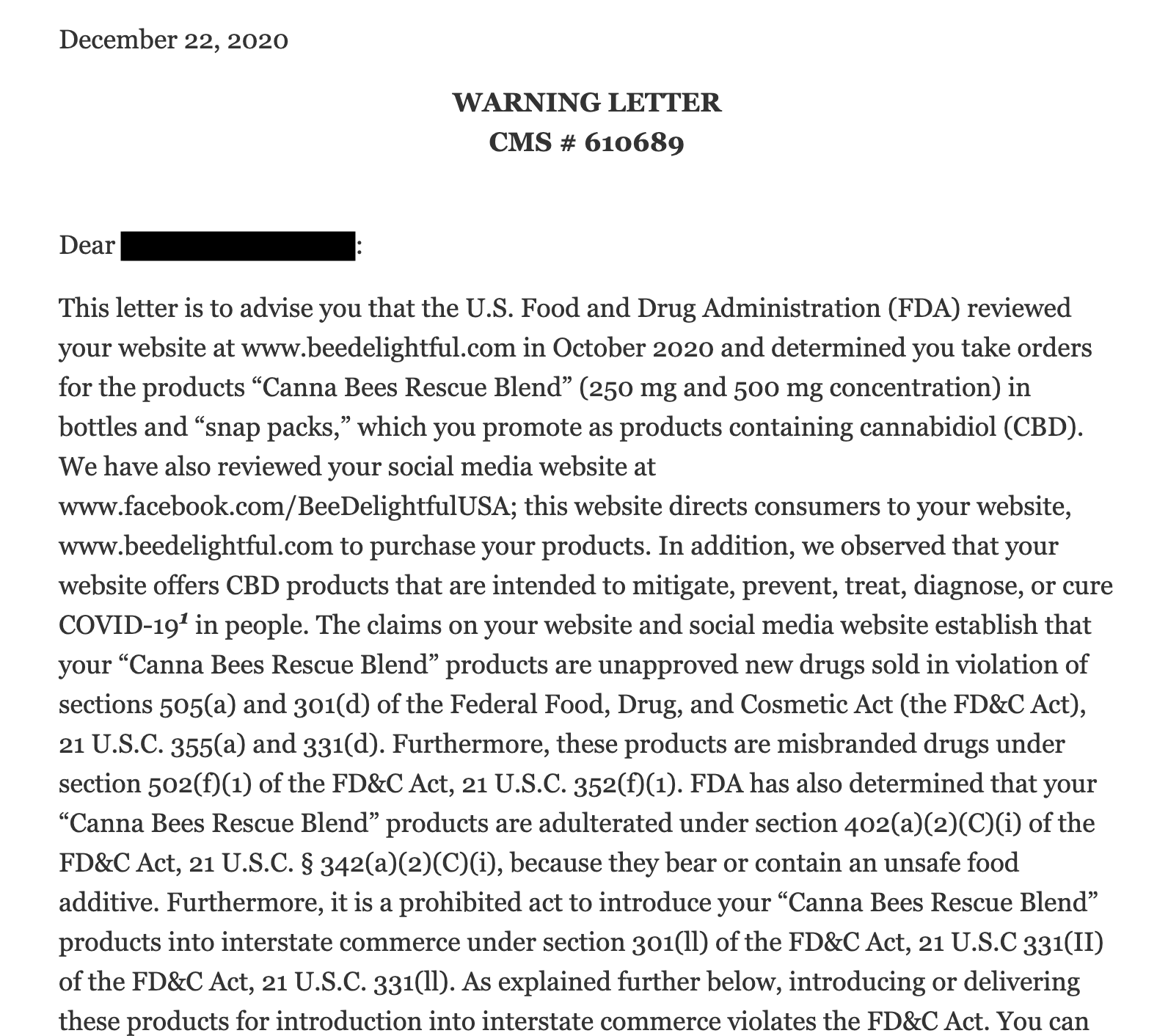 FDA warning letters sent to pharmaceutical companies are freely available for you to examine, and can be accessed here: https://www.fda.gov/inspections-compliance-enforcement-and-criminal-investigations/compliance-actions-and-activities/warning-letters

The FDA also oversees the “Bad Ad” or Truthful Prescription Drug Marketing and Promotion Program. This project empowers both the general public and health care providers to identify and report potential sources of drug misinformation.

The FDA provides the following list of common reasons pharmaceutical advertisements may be reported and/or receive a warning letter:

If you come across a potentially false or misleading drug advertisement, you can report it anonymously using the following methods:

More information about the Bad Ad program itself can be found here:  https://www.fda.gov/drugs/office-prescription-drug-promotion/bad-ad-program

It's time to learn how you can more critically view the drug advertisements shown to us on a daily basis. In this next section, we will provide an overview of questions to ask yourself when viewing medication ads, as well as the reliable online resources you can turn to when interested in learning more about the medications you see advertised.